How Flimsy Pro-Global Warming Science Gets Sold to the Public

I have a big respect for the Capital Weather Gang's work at The Washington Post and I am appreciative of the times they have asked my opinion on various issues. So, given that level of respect, this headline today caught my attention:

I wanted to learn more. The story told us that the earth is going to warm (no surprise there), it quotes two government scientists that praise the study (no surprise there), and a little about the study's methodology. After reading the CWG story and parts of the study itself, I found things didn't add up. Let's call the study which forecasts more tornadoes the "Diffenbaugh study" after its lead author.

It begins by telling us,

There is now considerable evidence that the occurrence and intensity of climate extremes have been increasing in recent decades, and that continued global warming likely will amplify these changes (1).

For those unfamiliar with scientific papers, the "(1)" is a footnote referring to another scientific study. In this case an IPCC study that was published last December. 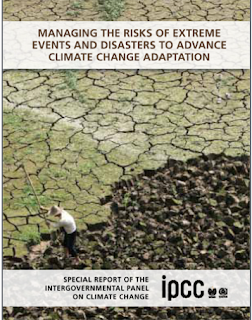 So, the entire premise of the Diffenbaugh study is that tornadoes and severe thunderstorms are increasing due to earth's warming temperatures and will continue to increase. Only one problem. The pertinent part of the IPCC study says no such thing. Here is what the IPCC study says (page 8),

(in case it is hard to read) There is low confidence in observed trends in small spatial-scale phenomena such as tornadoes and hail...

In what universe does "considerable evidence" in the context of a study about tornadoes and severe thunderstorm trends equate to "there is low confidence in observed trends in...tornadoes and hail"? Why is this important? The Diffenbaugh study is based on, at best, a flawed premise and, at worse, a false premise. Even though temperatures have warmed in the last 60 years, there is no upward trend in violent tornadoes.

Here is the National Weather Service's plot of violent tornadoes since 1954. 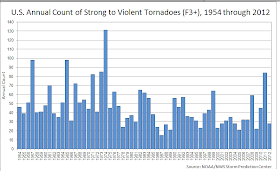 Here are world temperatures since 1954: 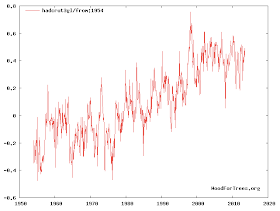 So, where are we?

In science, nothing is supposed to be taken for granted. Skepticism is to be rewarded as it is part of the scientific method. Yet, the scientific method is too often given a pass when it comes to climate "science." The Diffenbaugh study and the CWG story, unfortunately, are yet another example.
Mike Smith at 7:29 PM
Share